The Timing Belt Service (often called the 120k or 60k service) is perhaps the most vital and significant maintenance job for the Z32. Because the VG30DE(TT) is an interference engine, maintaining the timing belt system is essential. Should the timing belt or one of its related components fail, it is extremely likely that major engine components (pistons and valves, specifically) will be destroyed as they collide with one another.

Because of the complexity of this job, it can also be expensive to have it done at a shop. However, it can be performed by a competent shadetree mechanic. But if you're not up to completing this job, just remember, $500 parts and $600 in labor is cheaper than replacing and/or rebuilding the engine.

Images and info presented below are combinations of original work, from rockchucker's many revival threads and TTZD's Writeup. 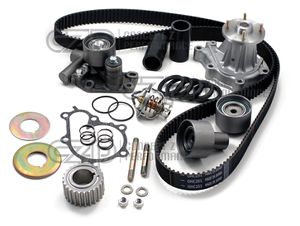 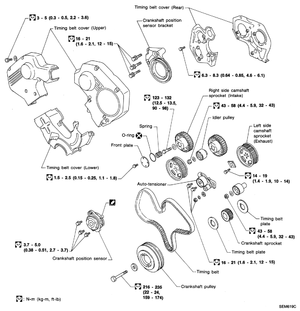 There are actually two forms of the Timing Belt service: the 60,000 mile timing belt replacement and the 120,000 mile replacement. The FSM recommends replacing the belt every 60k or 48 months, whichever comes first. Because the related components (like the idler pulleys) are so vital in maintaining engine health, it's highly recommended to just do a complete 120k service instead of the basic 60k. Other components, like the water pump and thermostat, are not necessary to maintaining timing belt functionality obviously. However, replacing these components is most easily performed while the engine is dismantled for the timing belt service, so it's the perfect time to replace them.

There are a few optional components often included with either/both of the above kits.

Finally, it is highly recommended that all parts in this job are replaced with Nissan OEM parts. The only exceptions being the RameyZ idler studs and, optionally, a Gates/GReddy High Strength Timing Belt.

The Crank Pulley can be a little tough to remove, but of course it's not impossible. 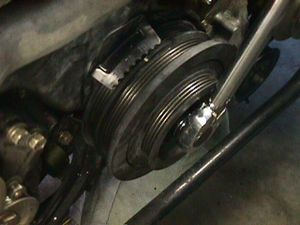 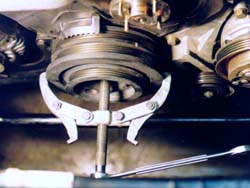 Alternatively, you can use a threaded puller (ie a steering wheel puller) to remove the pulley, as it has two threaded holes in the front.
Be careful not to drop the pulley. It's a friggin' boat anchor!

Now that you have easy access to all the timing components, we can get into the nitty gritty.

The following steps will require you use the old timing belt to secure the position of the cam gears while you loosen the bolts. Everyone has their own way of doing this, but pictures of some recommended ways are provided. 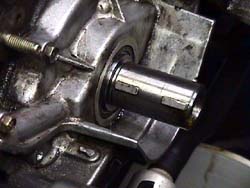 It is of the utmost importance that the timing belt is installed correctly. It is absolutely essential in the performance and longevity of the engine, so please pay careful attention to these steps.

Click images for full-size views. Will open in a new window or tab. 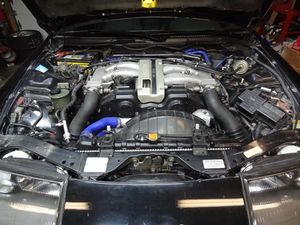 Confirm there are no leaks, strange squeaks or rattles, etc.... and enjoy!