Jacking Up The Z

The Z can be a difficult car to get into the air, and being that it's so low, it's pretty much essential for doing anything that's under the car. This guide aims to help you get your car into the air safely and easily.

Thanks to ZHome for original pictures and info.

With lowered Zs, low-profile jacks and the 2x8" boards are practically a requirement. 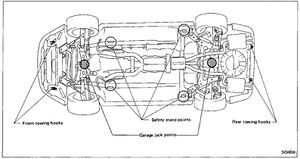 In emergency situations, the included jack (in the tool box) is decided to raise the Z from the pinch welds as illustrated on the jack. However, this should be avoided if possible as it will virtually guarantee damage to the pinch welds. Further, NEVER raise the pinch-weld area where the frame meets the front fender--this WILL cause damage.