From Z32 Wiki
Jump to: navigation, search
The air conditioning system is a collection of components and devices that contribute to provide refrigerated, cool air to the passengers in the Z32. It is made up of several components, with the most significant being:

And while not exclusively parts of the Air Conditioning System, the following components are related:

The system is largely the same between NA and TT models, the major difference being a slightly different shape in the low-pressure pipe to allow it to clear the intercooler piping, and a different condenser design for the same reason. 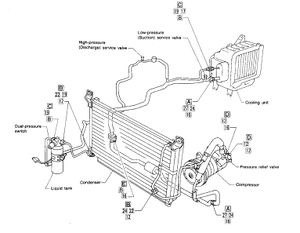 The air conditioning system works in a cycle, similar to the cooling system. The compressor draws refrigerant (as a gas) in through the low-pressure pipes and compresses it to around 250 PSI. Compressing this refrigerant causes it to become quite hot, so it is then moved to the condenser, which is mounted in front of the radiator. The condenser, like a radiator, transfers the heat from the gas into the air passing through it, cooling the gas. This cooling effect also causes the refrigerant to change into a liquid, in the same way that cooling steam turns it into water, which also condenses the molecules (hence the name "condenser"). The refrigerant now moves to the evaporator, where it is channeled through the expansion valve, which sprays it like a mist, into the low-pressure evaporator. The refrigerant molecules now have a chance to expand and turn back into a gas, thanks to the lower pressure. But doing so requires heat, just like it does to get water to evaporate by boiling, so the refrigerant molecules absorb the heat from the air passing through the fins of the evaporator, cooling that passing air which then flows into the cabin. The refrigerant flows, in gas form, back to the compressor where the cycle continues. It should be pointed out that the air conditioning system isn't actually creating coldness, as "cold" isn't a property of thermodynamics--it's simply a lack of heat. The system removes the heat from the passing air.

There are essentially four different A/C setups used on the Z32.

Revisions for R134A included a revised condenser which featured a denser fin arrangement, and a two-way pressure sensor switch on the receiver/drier (which would turn the compressor off if pressures became excessively high or low. The R12 model only switched off for low pressures). NA and TT utilize different condensers and engine bay piping (both in order to clear intercooler piping in the TT model).
It should also be noted that R12 systems with auto climate control utilized a suction throttle valve to prevent evaporator freeze-up. No other models featured this, and used a thermostatic sensor that would temporarily disable the compressor in the event of excessively cold temperatures. The climate control unit itself also went through a few different revisions, check that parent page for details.

The Air Conditioning system is complex, and things like to fail. If you're having problems with your system, refer to the table below for some common problems and causes.

The A/C system operates under extreme conditions--pipes carrying pressures of over 250 psi through a hot engine bay while subjected to vibration and harshness, and things tend to break over the years.
Some of the following articles deal with servicing the A/C system. For more, see the related articles links at the bottom of this page.

The system uses about 5.3oz of oil, and it's okay for this level to deviate by a couple of ounces. When replacing A/C components, it becomes necessary to add oil to replace any that was lost. The service manual details the amount of oil to add based on which components are replaced.

As necessary to meter and and refill the new compressor.