The A/C Compressor is a device that compresses refrigerant in the air conditioning system. It is one of the major components in the A/C system. 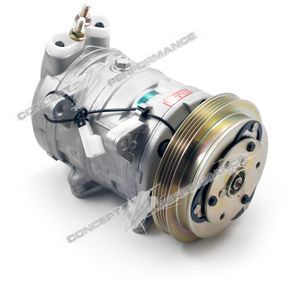 The Compressor is used to compress refrigerant in the A/C system. The condenser then removes heat from the refrigerant before it is re-expanded into the evaporator. The expansion cools the evaporator, providing cool air to occupants in the car. Refrigerant is then returned to the compressor.

Z32 A/C Compressors are quite robust from the factory, so much so that R12 compressors will happily provide years of service after conversion. However, failure is not impossible. Faulty compressors will lead to less-than-adequate cooling (by fault of inadequate refrigerant compression and circulation), and can even fail catastrophically if over-pressurized.
The compressor clutch is another common point of failure, as it operates in quite tight tolerances.

Replacing the A/C compressor should only be done after any refrigerant in the system has been completely and properly evacuated from the system. For more precautions regarding this, see the AC Recharge article.

Note: If storing a good A/C compressor, store it in the same orientation as it would be installed, and plug the ports on it.

Installation is mostly the reverse of the removal, with a few things to note.

The compressor requires a small amount of oil for lubricant. This flows through the system with the refrigerant. When replacing the compressor (or any component in the A/C system) it's often necessary to add some oil to compensate for what's lost in the old part.
For more information, see the Compressor Oil section of the main Air Conditioning System article.

Man, I hate completing giant writeups and having NO PICTURES to show in them :(