We get a lot of questions regarding suspension on these cars… A LOT of questions. It seems most people out there have found a reason to modify the suspension on their Z for one reason or another. Most guys lower their cars and end up needing to make further modifications to compensate for it. Others simply want to refresh their stock suspension to replace worn components.

I wanted to discuss what the various components we need to worry about in our suspension are, what they do, and what to replace them with. A lot of this will be common knowledge to some, but to others it might be brand new information, so let’s start from the top!

First up is camber. The camber setting affects how “inward” the top or bottom of the wheel sits in relation to the ground. As you can see in the above diagram, negative camber makes the car look like it’s squatting, and positive camber looks ridiculous. A car with 0° of camber would have the wheels perfectly straight up and down; perpendicular to the ground. Generally, most cars, especially sports cars, will have a small amount of negative camber from the factory, around -1°. It’s a bit improper, but when people talk about “adding camber,” they usually mean reducing the value–that is, making it more negative. When you lower a car, you’ll end up with more camber (see what I did there?), and how much is dependent on the car’s suspension geometry. 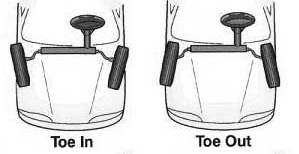 Finally is caster. This affects the way the wheels turn in relation to one another, as well as how the steering wheel “auto corrects” after you complete a turn. Generally, we don’t need to change the caster setting, other than to make the wheel sit evenly in the wheel well.

Those are the three main adjustments we’ll be talking about in this article. Before we dive in to the car specifics, I also want to point out a few ways these components can be constructed. From the factory, virtually every joint is going to be a rubber bushing. Rubber bushings generally offer the most comfortable ride, because it will deflect from shocks and bumps, but because they’re softer they’re not going to give you as much feedback, nor will they hold components as strongly as some other options.

In this picture of a Nissan OEM Rear Upper Control Arm, you can see that the outer joint uses a rubber bushing. 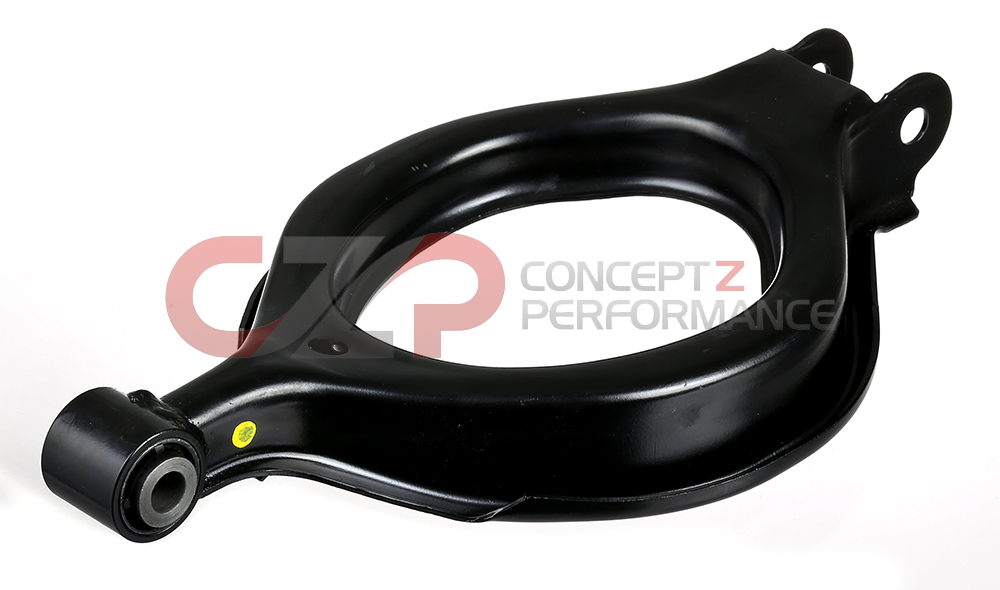 The OEM suspension arms virtually all use rubber bushings with an inner collar fused to the rubber. The rubber twists and deflects as the arm travels.

Most suspension arms are going to replace these with spherical bearings, also known as heim joints or pillowballs. Some consider to these as solid or semi-solid joints. These are usually constructed with a layer of teflon cushioning the inner and outer portions of the joint. Low quality joints wear our quickly and lead to slop in the component, but high quality joints feel great on the road (I would argue as good as bushings for certain arms) and last a long time. These are often the most expensive component of an arm, so cheaper arms often skimp on the quality of the joint. 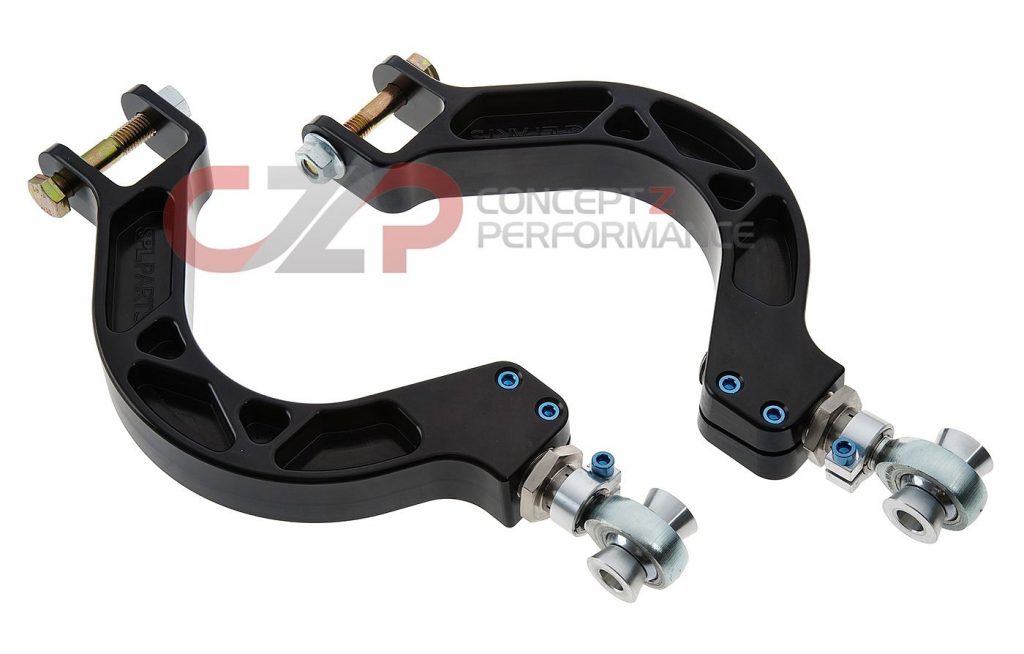 SPL Suspension Arms use high-quality spherical bearings for their joints.

One advantage to these arms is they do not resist movement like bushings do. In a setup where all of the bushings have been replaced with heim joints, including those at the spindle/knuckle assembly, the hub is able to freely travel up and down, and any and all force is put directly on the strut (shock+spring assembly). This can really improve the way the car feels, especially under competitive driving.

Another common option here are urethane bushings. These are effectively set up the same way as stock rubber bushings, but urethane is going to be stiffer than rubber, for the good and bad. You’ll get more feedback as a driver, but it will provide a harsher ride as well. Some urethane joints also allow the inner collar to “free spin” inside the bushing which will improve the ride quality a bit. 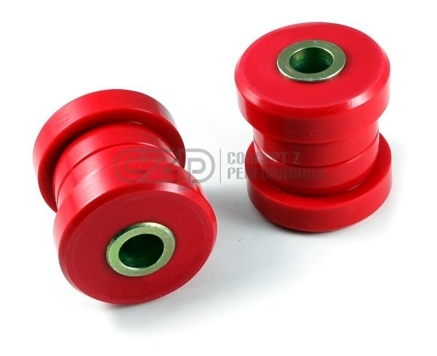 Energy Suspension is by far our most popular manufacturer of urethane bushings.

There are a few arms that only need to rotate on one axis, rather than two. With these, roller bearings are common. In the Z32 world, this will most commonly be found on the Front Upper Control Arms. 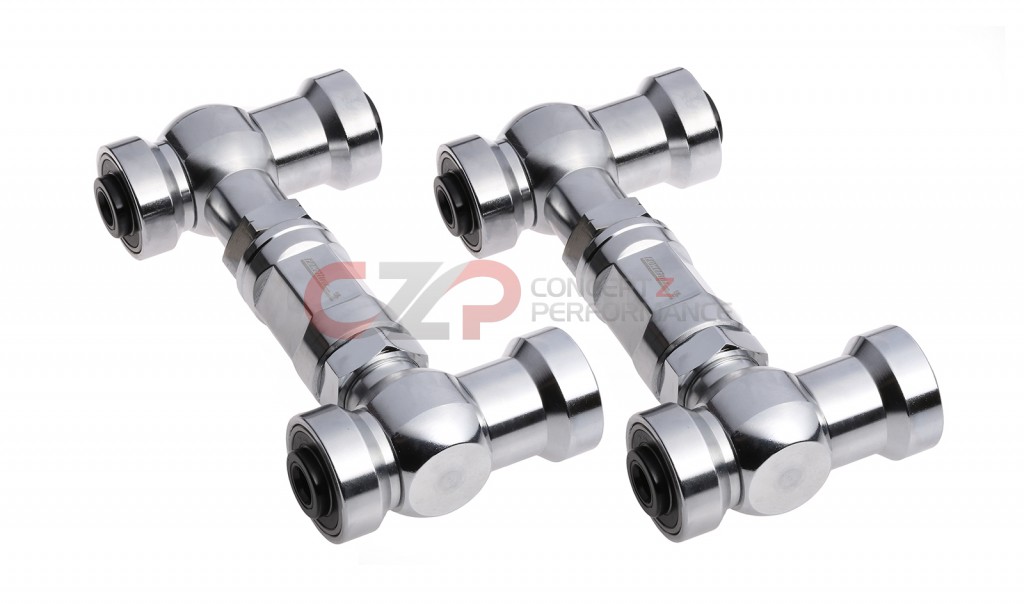 Powertrix Front Upper Control Arms. Note the roller bearings which will only allow rotation around one axis.

Now that we’ve established what our alignment does, and how some of the components are constructed, we can talk about how these apply to the Z32. First, let’s take a look at the front suspension. The front is the same for NA and TT. 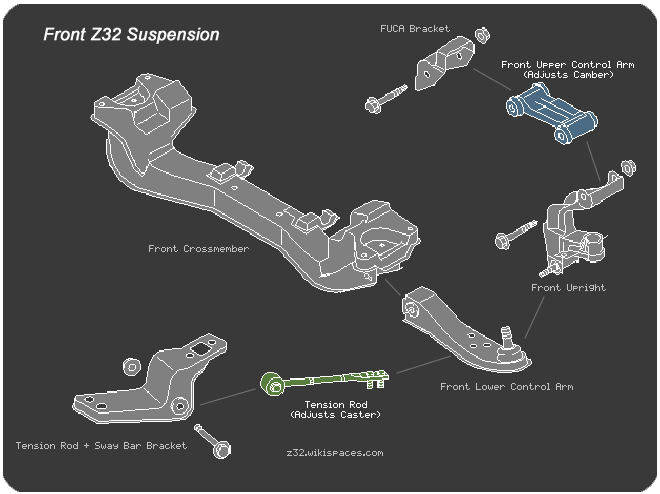 So, the diagrams are labeled, but just to be clear, here’s what each component does:
Front Upper Control Arms – Adjusts camber in the front. The stock arms use rubber bushings, as the “upright” will actually try to twist slightly as it travels up and down, and rubber bushings allow that. Additionally, since the tension rod controls the caster (front-back movement) of the spindle, the upper control arm needs to allow a little bit of deflection laterally. For these, I usually recommend either Z1 Street (they use urethane bushings that allow a little of that pivot), Powertrix Extended (great for super low cars), or even Top Speed if you don’t need anything special.

Tension Rod – Adjusts caster. Generally, if you upgrade to different upper control arms, they’re going to have roller bearings. Almost all on the market do. For this reason, you normally have to change tension rods at the same time. Because the roller bearings in the upper control arm won’t allow forward-backward movement, the tension rods must be set at a length to match their position. Since stock isn’t adjustable from the factory, aftermarket becomes a necessity. Tension Rods are one you really don’t want to cheap out on. As the name implies, they are under a lot of tension, and the cheaper ones’ bushings always fail quickly. I like SPL, VooDoo13, and SPC (for a like-stock replacement with adjustability).

Not pictured are the tie rods, which are considered part of the steering system. Those are always adjustable from the factory, by design, and allow you to adjust toe. If your car is super low, though, different outer tie rods can be beneficial, as they’ll allow the tie rod to sit in a position more parallel to the ground. This helps reduce “bump steer” or “toe steer,” which is the sensation that the car is getting pulled to one side when the suspension travels on that side. For these, check out SPL Outer Tie Rods.

The lower control arms also would allow you to adjust camber, if they were adjustable. But adjustable versions are very rare, and not really necessary, for how common the FUCA is. It does, however, have rubber bushings which will wear out, and a ball joint as well. Additionally, the upright virtually never gets replaced, as it pretty much never goes bad. Nissan says the kingpin (the bearing in it) will make a “growling noise” when it goes bad. I very rarely see this actually happen.

For the rear suspension, I have two diagrams for you. Most of it is the same between TT and NA, but the TT has HICAS 4-wheel steering, so it has a HICAS Rack and tie rods, much like a front steering rack. The NA has a more traditional setup, using a toe arm instead. 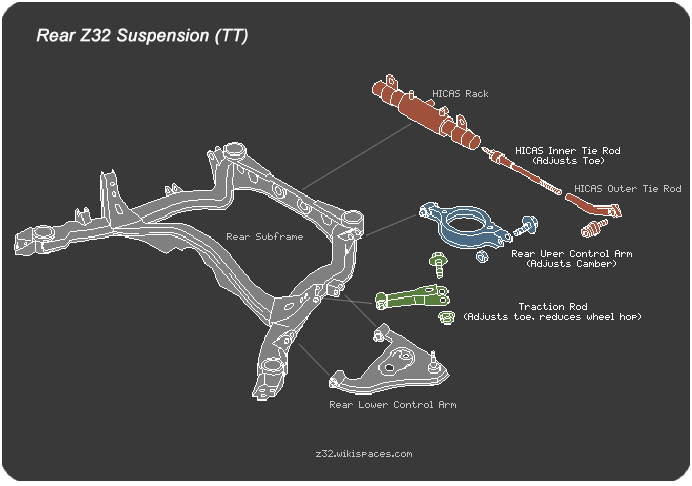 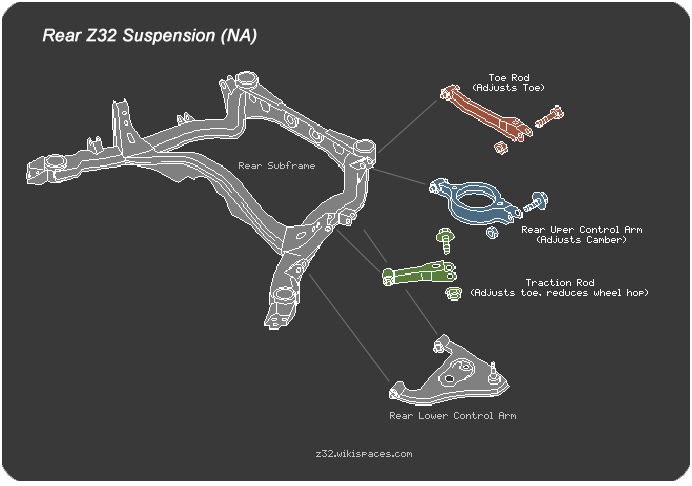 For adjustability, it isn’t necessary to replace the HICAS rack on Turbo models. Like the front steering rack, the toe setting is adjustable by design, and you have more range of adjustment than you’ll ever need. This is not always true with the NA, however, as it uses eccentric bolts to adjust. These are  basically bolts with egg-shaped washers on them, so their rotation determines the positioning of the arm in relation to the chassis. If the suspension is drastically modified, those bolts might not be able to get it in spec, so you would need something adjustable. In my opinion, SPL is the best option hands down.

Rear Upper Control Arm – This is the most commonly replaced part, and it controls the camber adjustment. This one’s not so picky, but like with any part avoid the cheap ones so you don’t have heim joints failing prematurely. With the S14, Nissan changed the design to be a “half circle” so it can more easily be replaced without removing the shock. Now, SPL and VooDoo13 both make arms that mimic this design. You have an eccentric bolt for the RUCAs from the factor, as well, but it’s rarely enough to get the alignment in spec if the car is lowered in any way.

Also, the traction rod or traction arm will give you slight toe adjustment, though not as much as toe arms or the HICAS tie rods. For this reason, it’s not often replaced unless you’re doing a track car and/or trying to get rid of OEM rubber bushings. It can also help reduce wheel hop under hard acceleration, especially if your stock bushings are worn.

Finally, like with the front, the rear control arms are rarely replaced, though some opt to change out their bushings for something different. I should point out that, while Nissan has a different part number for the NA and TT RLCAs, the only difference is the durometer (stiffness) of the rubber bushings. They’re otherwise interchangeable, and I’d be hard pressed to be able to feel a difference. I’m also fairly certain that the Nismo RLCAs are just silver TT RLCAs…