If you’re looking to replace a worn suspension, improve your car’s handling, or just slam it to the ground, coilovers are a must-have. There are several different brands, styles, and types out there, and we are asked daily which kit is the best route to go for.

Which setup you choose is really more about what you plan to do with the car. The most expensive kit is not always going to be the best option. There are a few things to keep in mind while shopping.

Most coilovers on the market will use a pillow-ball upper mount. This means a spherical bearing is used as the joint between the strut assembly and the top-hat, where it mounts to the car. A pill0w-ball will produce sharper, more precise handling, but it will also transmit vibration and harshness through the suspension more easily, producing a harsher ride on the street. 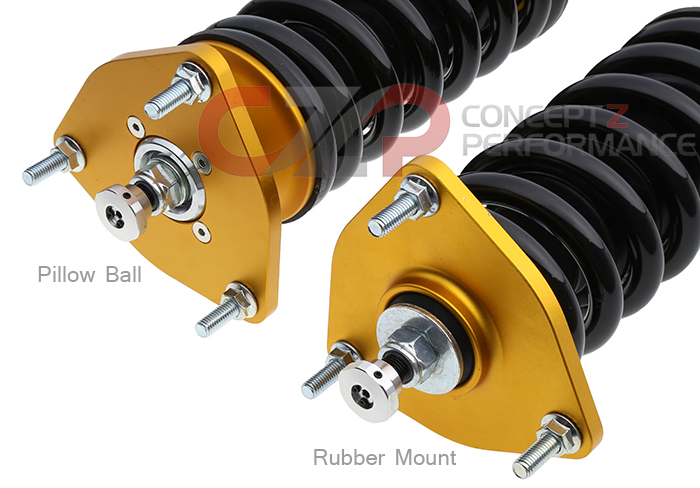 Many newer brands are offering rubber upper mounts. These provide a slight amount of deflection, compared to pillow-ball. While virtually of them will be stiffer than a stock setup, a coilover using rubber mounts will be much more streetable than one using pillow-ball mounts. Here are some popular coilovers and which mounts they use:

Additionally, some coilovers, like the Tein Street Advance and KW Variant 3s, forgo the inclusion of upper-mounts altogether, and instead you just re-use the upper mounts your stock suspension uses. Because the stock suspension uses a large, rubber spring seat, this will almost always offer the smoothest ride, but is not always the best choice for performance. 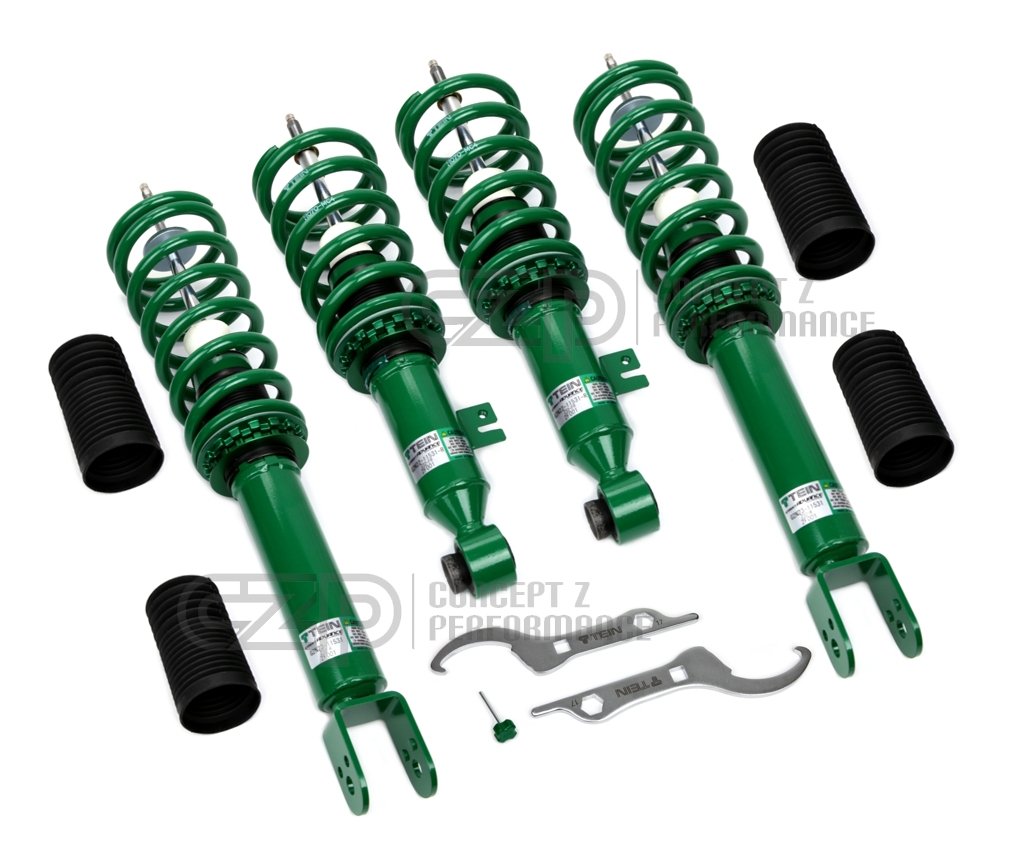 Coilovers are generally all adjusted the same way. You loosen the lock collars at either end, and twist the main threaded shock body (sometimes called the “cartridge”). Twisting the shock body effectively screws it into the lower mount (called the “cup”). Screwing it further into the cup will lower the car, and unscrewing it will raise the car. If you’re looking to go extremely low, you may find that the car isn’t as low as you like once you screw the shock body into the cup. The only way to go lower from here is to unload the spring.

When you unload the spring, by spinning the spring’s lower mount around the threaded shock body, you create a condition called “droop”. This means the spring is basically loose; you can physically jiggle it around. But when you set the car on the ground, the shock compresses and sits on the spring like normal, and the result is that the car is now lower.

Droop can be a dangerous condition, however. If you hit a large bump, the spring can free-float between the upper and lower mounts while the coilover is unloaded, and there’s nothing forcing it to land correctly. So once the coilover compresses, the spring may land incorrectly, causing serious damage.

Helper springs are thin, light springs that are installed between the main spring and the spring mount. They are easily compressible, and exist purely to let the car go lower. Keeping helper springs in place means that even if the main spring is unloaded during driving, the helper spring will stretch out to maintain constant tension on it, keeping it in place to ensure it will land correctly. This gives you the benefit of lowering the car more, but negates the dangerous side-effects of you would otherwise get from the “droop”. 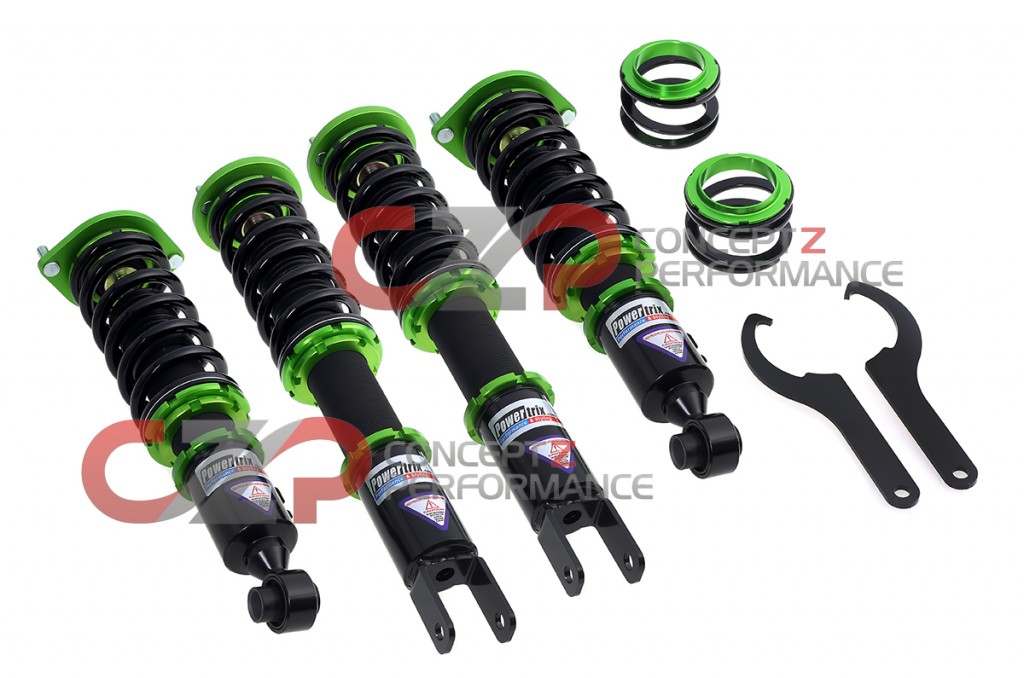 Powertrix SS Coilovers include front + rear helper springs out of the box.

Some coilovers today include helper springs out of the box, like the Powertrix Sport Street, and Stance SS+ (the “plus” versions are exactly the same as the regular SS, just include helper springs), but most can be added down the line if desired. They are available from Stance and Powertrix, but are compatible with most other brands.

This won’t apply to Z32 guys, but the “VQ” generation cars (350Z, G35, 370Z, etc) use a separated rear spring and shock. The spring sits in a cup on a control arm, and the shock mounts to spindle and body of the car. Many coilovers are available in both styles. Neither is truly superior to the other, though many feel a “true coilover” setup is a better choice for a car where performance is a higher priority. This is partially because switching to a true coilover setup allows you to replace the rear control arm which otherwise houses the bulky, heavy, spring seat. 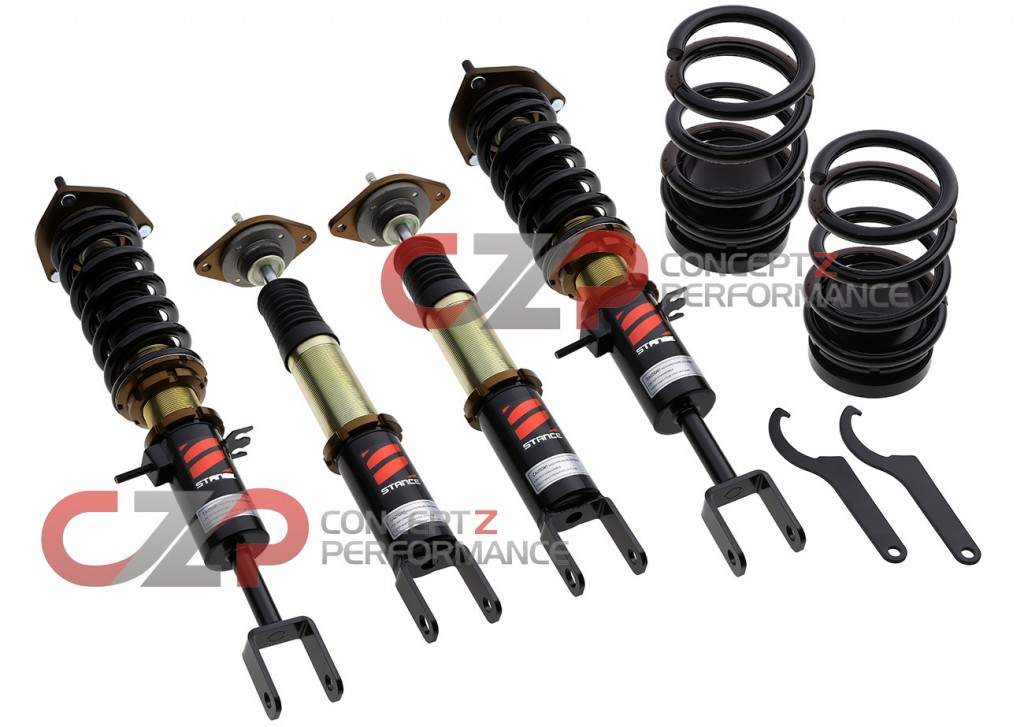 Stance SS Coilovers are available in both “true coilover” and “OEM style” (Pictured).

There is some debate surrounding which choice is better, but it really just comes down to personal preference!

Perhaps, the most important thing to consider when buying coilovers is the spring rate. The spring rate is the rate of compliance of the spring. A higher number will produce a stiffer ride, but better handling. And the reverse is true, lower spring rate will lead to a softer ride, but a bit more body-roll under hard cornering.

Some coilovers give you the option of selecting a spring rate, and virtually all allow you to change the springs completely in the future if you like to. This is a great feature if you decide you want to move up to a stiffer spring rate or down to a softer one, but it should be done with some prudence. You can generally move about 2k/kg in each direction safely before the shock needs to be re-valved. Otherwise, you end up with a coilover that gives you either a bouncy ride or an overly harsh ride.