Since my last article on the topic, the VR30DDTT has made it into production vehicles and has been shipping for several months. We recently picked up our own Q60 Red Sport 400 to build and develop on, and we’ve also spent some time researching the car and its components.

If you’re not already familiar, the VR30DDTT is available in two trim levels: a 300HP and 400HP variant. The 400HP in the Red Sport trim levels of the Q50 Sedan and Q60 Coupe, and the 300HP variant is used in any other model that ships with the 3.0. Infiniti says the difference in output is due to an additional cooling pump, as well as the RS400’s turbochargers having optical speed sensors to monitor compressor wheel RPM. Check out the picture below to see the two side by side. 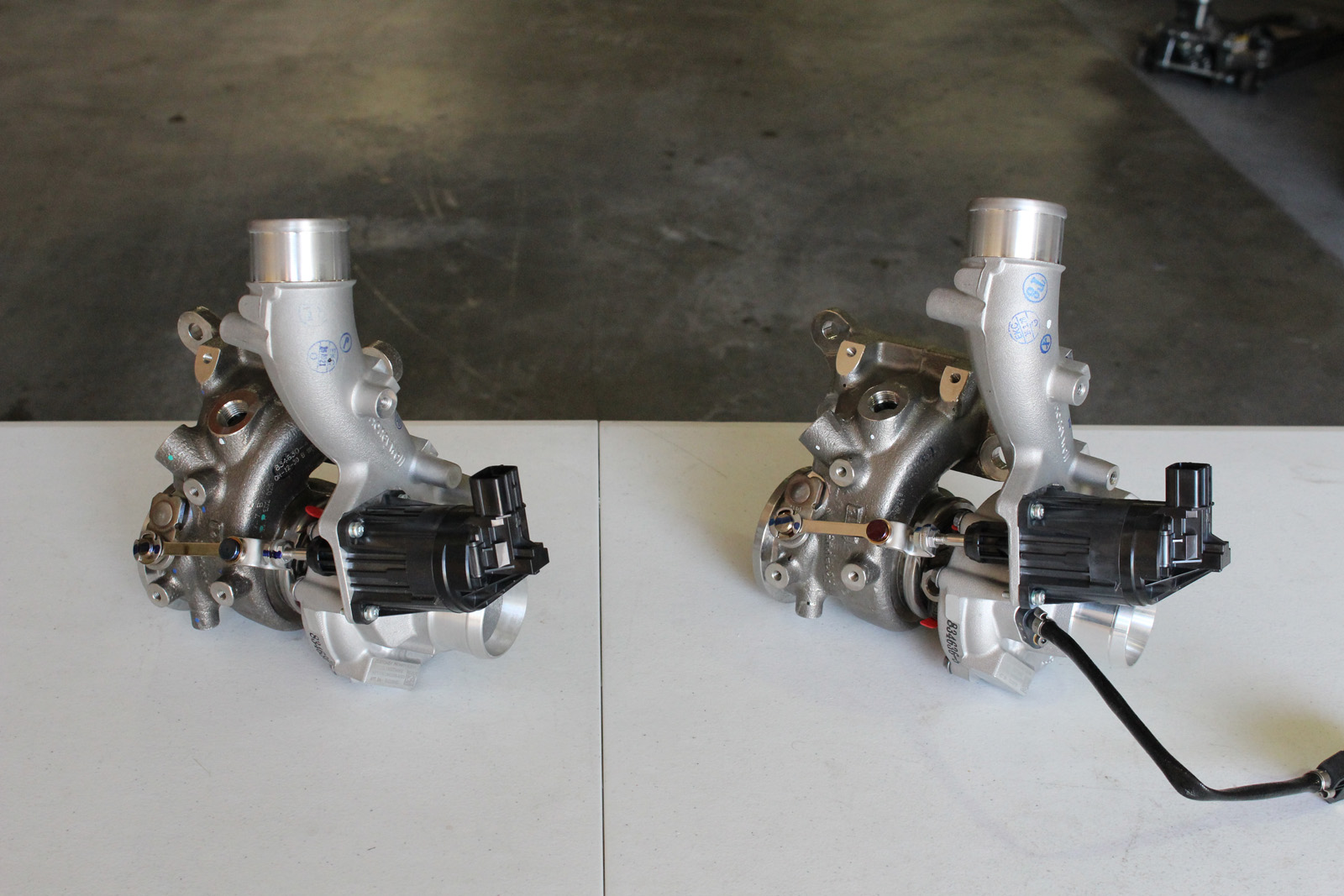 Well, they were telling the truth: that’s the only difference. Let’s take a closer look around these turbos just to get to know them a bit better.

What you’re looking at is the FZ5t Turbo by Honeywell/Garrett. It is an MGT1446LKSZ. “MGT” is the current line of “Modern Gas Turbos,” and 1446 basically refers to the size. With no context, just know that that’s tiny. It’s smaller than stock Z32 turbos were. The MGT series also includes Garrett’s latest low-loss “Z” bearing CHRA. Nissan’s obsession with fast response certainly hasn’t changed!

These turbos have a couple of other tricks up their sleeves, too. First, like other MGT turbos (found on Ford Ecotecs and some other modern turbo engines), the rotating assembly is offset. Most likely for packaging. 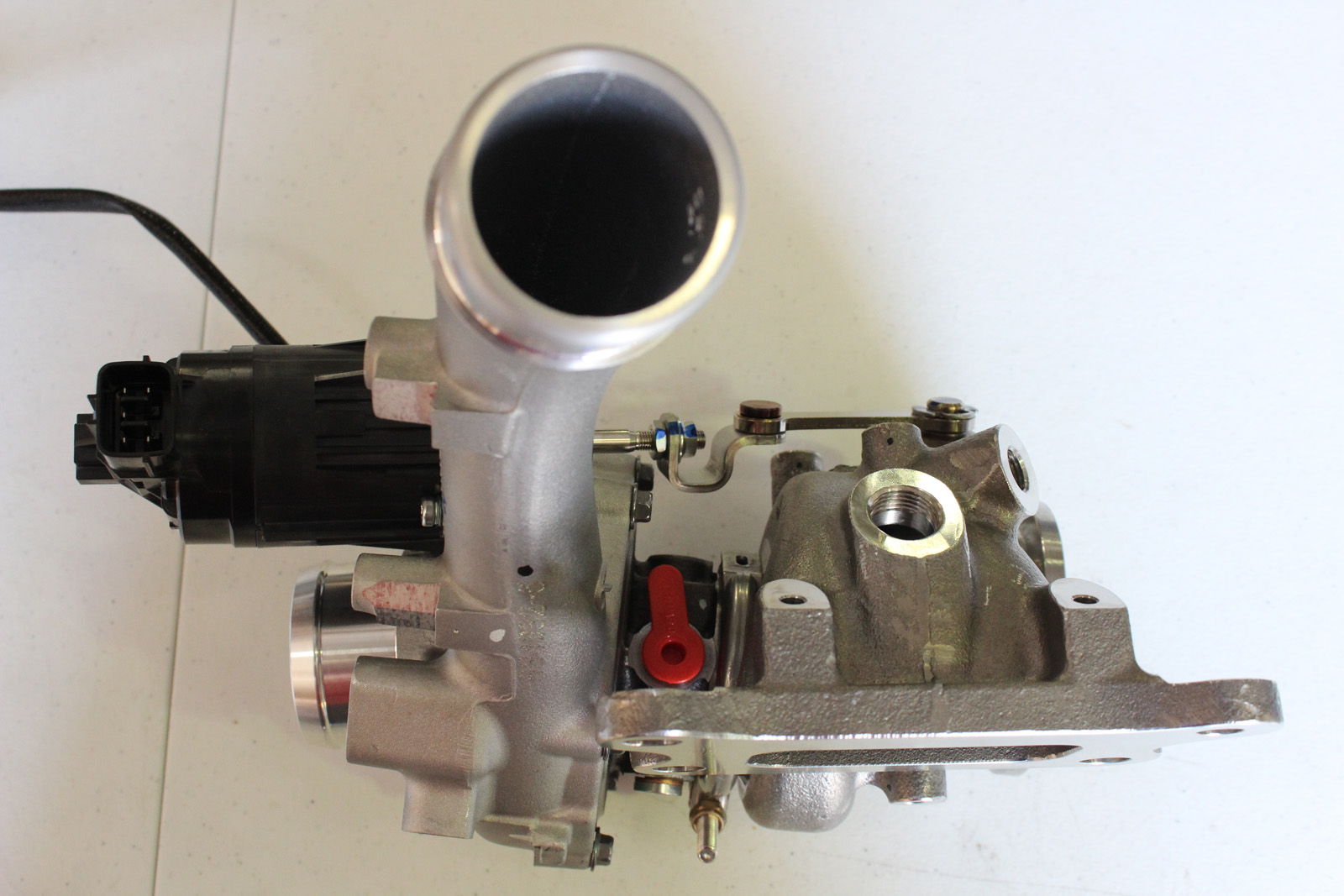 Note that the CHRA is not perfectly perpendicular to the flange for the exhaust housing and compressor inlet coupler flange.

Next, can we talk about that flange? It’s absolutely massive. Which makes more sense when you understand how the turbo mates to the cylinder head. There is no dedicated exhaust manifold, but rather the runners merge inside the casting of the cylinder head, so the turbo bolts directly to the head. 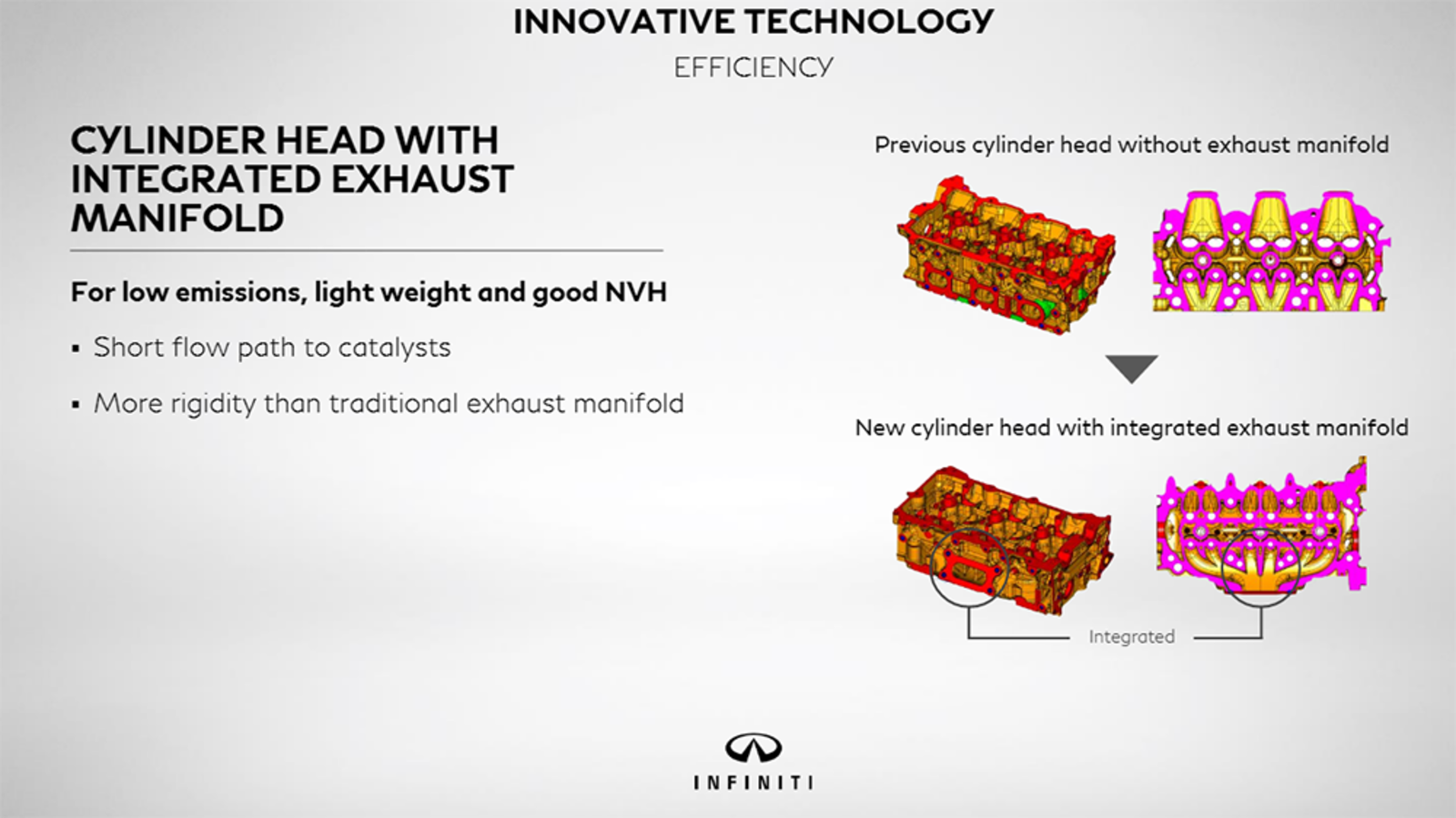 Also in this flange Nissan has both an up-stream (pre-turbine) oxygen sensor as well as an EGT sensor.

Moving towards the back, you’ll see another unique change to the MGT turbos. The turbine wheel and wastegate flapper dump into an open bellmouth area, similar to Borg Warner EFR Turbos. You’ll notice the flapper also opens to dump exhaust into the exhaust stream in the same direction that it exits the turbine wheel to further reduce turbulence. 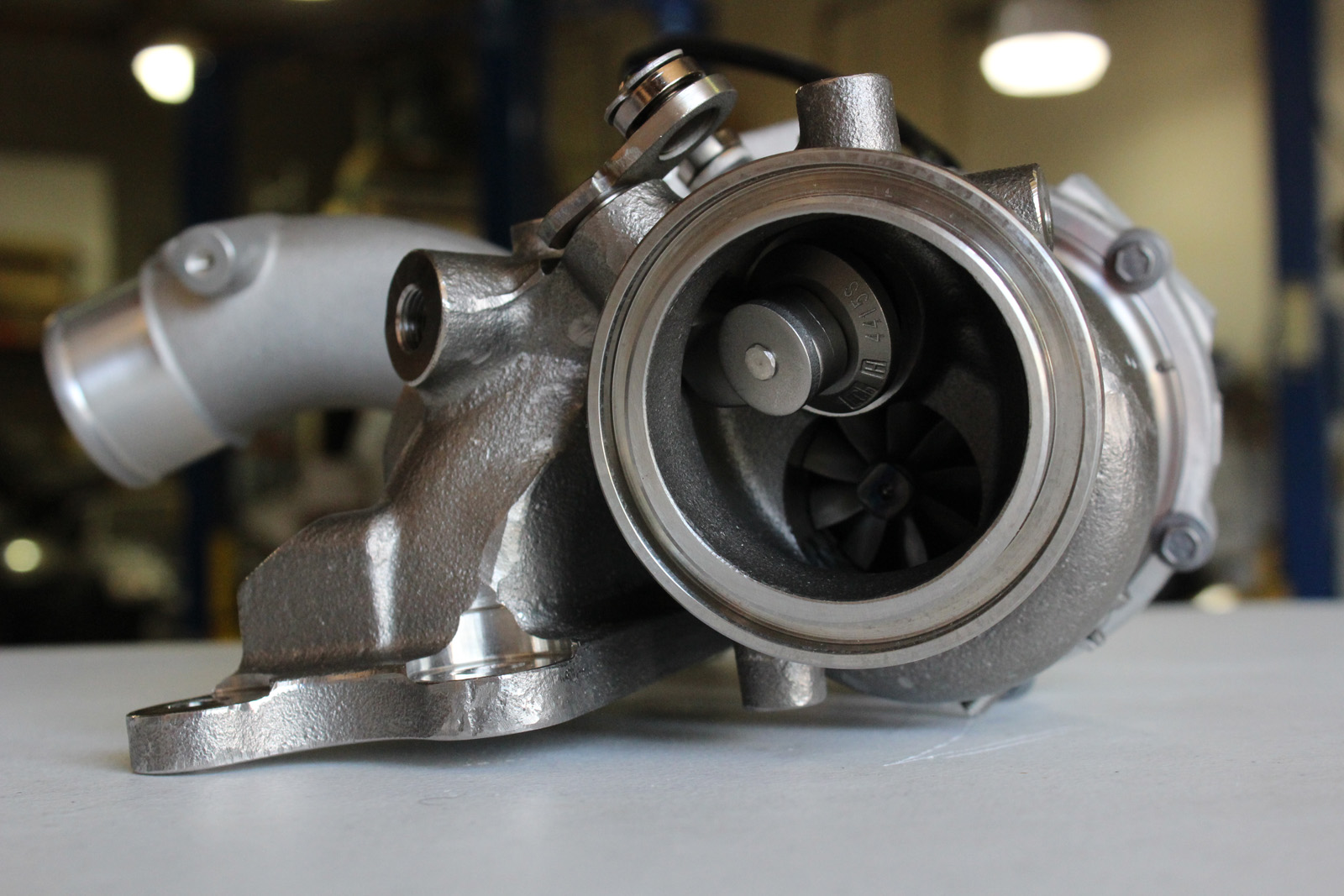 Moving on, check out the wastegate actuator. Gone are the oldschool pneumatic actuator-type, these are fully electronic. 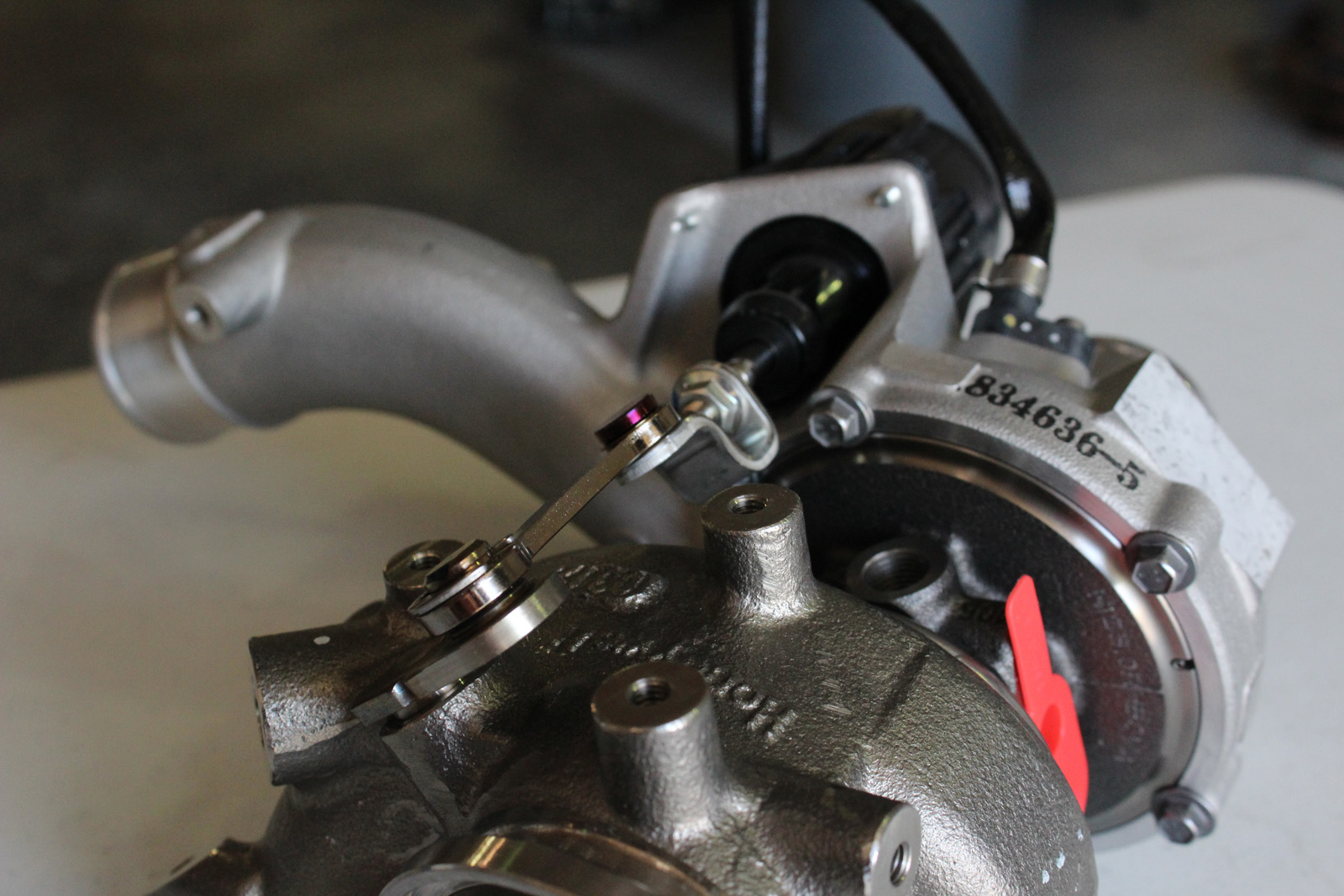 These give the ECU a lot more control over the boost level, which is one of the things that allows the RS to push these turbos to their limit. I also find it somewhat interesting that the “bracket” for the actuators is basically cast into the compressor housing. And it’s difficult to see, but the wastegate flapper’s resting position is open. Chances are this is a failsafe to prevent the car from building boost should something go wrong, and the ECU snaps them closed when the car is powered on.

Finally, here’s the front of the turbo. There are two points of interest here: 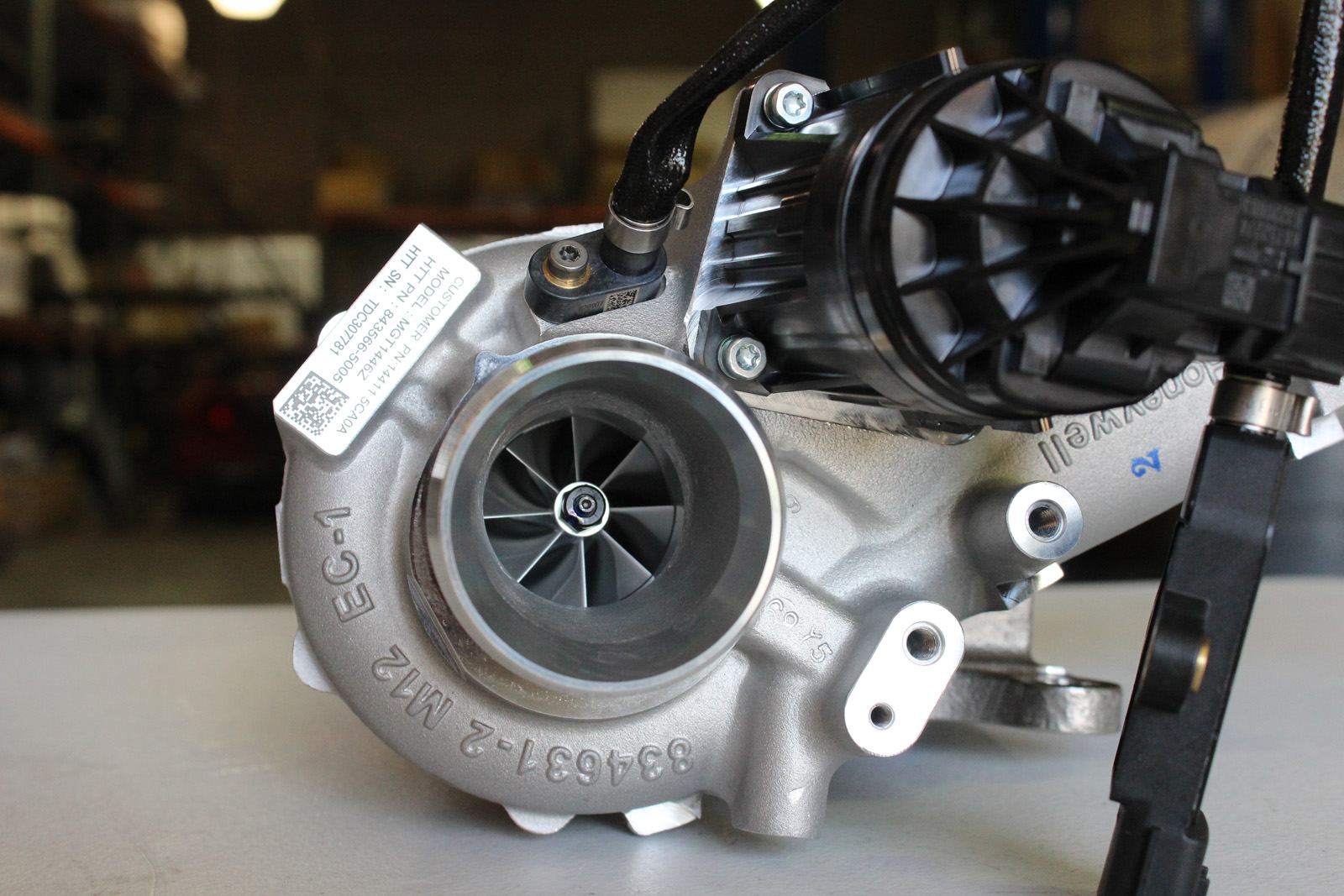 First, check out that compressor wheel. Sure it’s tiny, but more importantly it’s billet. This makes it a hair lighter, and also increases the blade surface area without increasing overall diameter. This is what Garrett started doing with GTX turbos, so it’s nice to see this technology make its way to smaller, OEM turbos.

When you take a step back and look at the complete package, it becomes pretty clear that Infiniti is basically trying to run this engine as efficiently as possible. You have direct injection, electric wastegate actuators, the RPM speed sensor, and twin coolant pumps for the water-to-air-intercoolers. They’ve set this thing up to run these turbos up as much as they can, with safety and control functions so the ECU can very carefully monitor and protect the turbos and engine.

That said, we’re certainly looking at a platform without a lot of “out of the box” room for improvement. Aside from removing emissions components (catalytic converters) and possibly intake, Nissan/Infiniti has damn near squeezed everything out of these turbos as possible.

But that doesn’t mean we won’t find a way to make more!