From Z32 Wiki
Jump to: navigation, search
The Z32 was in production for several years before its release in 1989. Whereas the original 300ZX (Z31) was based on a modified 280ZX chassis, the 300ZX was (as marketed at the time) built from a "blank page." Before beginning the design of the car, Nissan wanted to philosophically answer what a sports car should be, possibly best summed up by the father of the Z car (Yutaka Katayama/Mr. K), a few years after the Z32's production ended:

"We no longer can afford to keep horses at home. Instead, we have sports cars. We can experience with a sports car the sensation of oneness with the car, recreating the finest in equestrian riding, no rider on top, or no horse under the saddle. And in running the public road, a driver should use the utmost in modern technology in the sports car to go safe and easy, as the cavalier of the past did with pride.

[The] sports car is the modern horse that a driver should drive with his heartbeat in harmony with its exhaust notes."

Their intention with the Z32 was that it should answer the question of "what a sports car should be." Nissan became so obsessed with the idea of creating a perfect sports car, that it is rumored that their design language of the time stated that all of their cars should be "fun to drive." 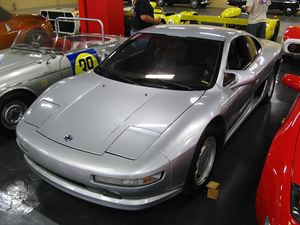 The Mid4 Concept, at the Nissan DNA Garage.
Around 1985, Nissan began work on a concept car known as the Mid4. It took on a few different forms over the years, and while Nissan received positive publicity regarding the Mid4 concept, they insisted it remain a concept car. Instead, Nissan used the twin-turbo all-wheel-drive Mid4 as a test bed for technology to later be employed in production cars. The Mid4 allowed Nissan to test, experiment, and fine-tune these technologies before putting them into production. 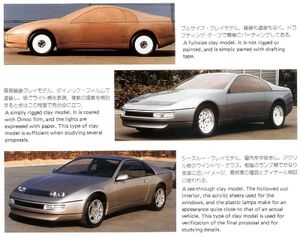 As the Z32 design team progressed on the car, the Mid4 matured technologically, allowing Nissan to transfer much of its technology over to the Z32. The VG30DETT was developed on the Mid4, as was HICAS, the Z32's (and R32's) suspension, and some other technologies including the All-Wheel Drive System used on the R32. Nissan also purchased a Cray-II Supercomputer to aide in the development of the Z32. At the time, it was one of the most expensive and powerful computers in the world. With its assistance, the Z32 became the first production car to be completely designed in CAD (computer-assisted drafting). 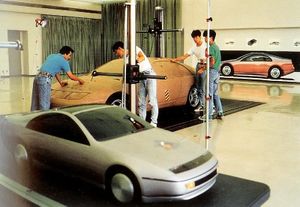 While the Mid4 was used to spearhead development of the Z32's drivetrain, the styling department was completely independent. Much work went into designing a chassis that was not only attractive, but functional aerodynamically and in every-day driving. Keeping with the intention of building a pure sports car, Nissan also invested heavily into the development of the interior. It was designed to feel like a cockpit, with every switch and instrument within easy access to the driver. The low, swooping design of the interior was far ahead of its time, and Nissan proudly displayed a wooden model of the interior to the press before the car was released. 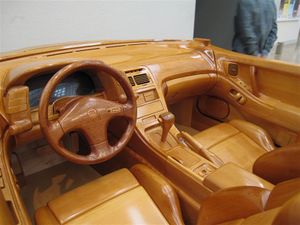 All trim levels were available naturally aspirated. The Turbo model was available in all trims except convertible. [Can anyone produce an example of a factory TT convertible? Slicktops are out there] 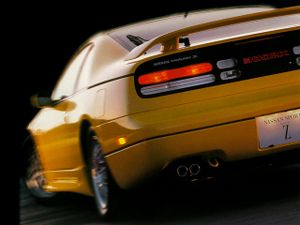 Marketing photo of the 1999 Fairlady Z.

Later into its production, the Z32 in Japan was sold under various "version" trims, such as "Version S" or "Version R." These corresponded to various exterior/interior packages and engine configurations. As all models came with a VG30DE or VG30DETT, all models were called the 300ZX, unlike the Z31 which had different models for different engines (such as 200ZR, 300ZR, etc).
In 1997, all Z32 models adopted the twin-turbo front fascia, presumably to lower production costs.
In 1998, for 1999, the Z32 received a cosmetic update. To name some, the differences included:

The 1998 Z32 also received a revised Manual Transmission, which used stronger synchronizers to combat a common "soft-synchro" problem that had become apparent on earlier Z32s.

Towards the late 90's, sales for high-end Japanese sports cars dwindled, and the Z was no exception. After the signing of the Plaza Accord, the Yen rapid began to increase in value compared to the dollar, forcing the price of the Z in the US up drastically in the mid-to-late 90's. Combined with the market's growing shift in interest towards SUVs, the high-end Japanese sports car began to die in the late 90s. Nissan stopped selling the 300ZX in the United States as of 1997, making the OBDII-equipped 1996 model the last model officially imported into the US.
In 2000, Nissan stopped production of the Z32 completely, effectively ending the 30+ year lineage of the Z-car. On top of the Yen:Dollar exchange difficulties that Nissan faced around the time, dwindling quality control and more drastic cost-cutting measures had left Nissan with a stale, unpopular car lineup and resulted in near-bankruptcy for the company. In 1999, Nissan partnered with French automaker Renault, leaving Renault with 44.3% of Nissan's shares, and Nissan with 15% of Renault shares. Under French law, this did not give Nissan voting representation, allowing Renault to appoint their own Carlos Ghosn as Chief Operating Officer of Nissan. He began the Nissan Revitalization Plan (NRP), and recognized the Z-car as a vital part of Nissan's lineup to preserve its national image as well as promote development of new automotive technology. The Z-car returned in 2002 (2003 in the US) in the form of the 350Z.
Ghosn's revitalization of Nissan was such a drastic turnaround, it's become a thing of popular culture in Japan, even being featured in Japanese mangas. In 2004, the Japanese government recognized his achievements and gave him a shiny blue ribbon (seriously).

The table below illustrates the different models and years of Z32s sold in the United States (credit to AZ-ZBum for creation of the original table).

In the US, the same chassis' were available:

However, in the US, the Turbo model was only available as a 2-seater with t-tops. While this chassis was also available in NA form, all other models were only sold as NAs.
For more detailed information regarding color codes and productions, see article: Color Codes.

Would someone who knows about European Zs edit this section ~_~

Any Aussies know about Z32 production in the oz?