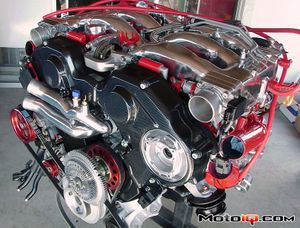 The VG30DE(TT) holds the following notable features and specifications.

Designed in the late 1980s, Nissan's twin turbo, DOHC, 4-valves per cylinder powerhouse is one of the all-time classic turbo engines. Surprisingly sophisticated both for its time and cost, the engine was fitted to the 300ZX twin turbo sports car. Nissan engineers were aiming very high with the car - the background to the engine development makes this very clear.

In this article we'll cover the technical nitty gritty of the engine and its original development goals. 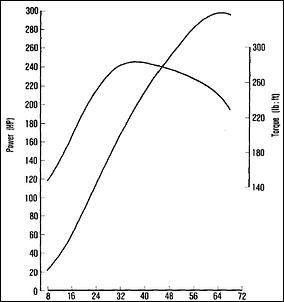 The VG30DETT is 2960cc in capacity, with an over-square bore/stroke relationship of 87 and 83mm, respectively. The combustion chambers are of a pent-roof design, with the spark plugs positioned close to the bore centre. The four valves per cylinder are operated by double-overhead cams working with zero-lash hydraulic tappets. The compression ratio of this twin turbo engine is 8.5:1 and the original specs show an SAE NET output of 300hp at 6400 rpm and a peak torque output (again SAE NET) of 283 ft-lb at 3600 rpm. Almost a cube in physical dimensions, the engine is 710mm long, 775mm wide and 695mm high.

While based on the much lower-powered VG30DE engine, major changes were made for the twin turbo engine. These weren't just limited to strengthening the engine and installing the twin turbos; instead the opportunity was used to design completely new intake and exhaust systems. The engineers made much of the fact that twin intercoolers, twin throttles, twin plenum chambers, twin turbos, twin exhausts, twin catalytic converters and twin mufflers were adopted.

The intake system design had to balance two opposing outcomes:


In addition, simulation and testing showed that long intake runners resulted in better torque development at low engine revs - however, fitting long runners into an already crowded engine bay was going to be difficult. Runners that were 360mm long gave peak intake efficiency at 4400 rpm, while lengthening these to 480mm dropped the peak intake efficiency revs to 3600 rpm. Since one of the goals of the engineers was strong bottom-end torque, the longer runners became a requirement. Further testing showed that a runner diameter of 48mm worked well with the 480mm long design.

[It's interesting to note the major amount of development that occurred in tuning the intake system in this turbocharged engine. Many turbo engines - including Nissan's own RB26DETT Skyline GT-R engine - have no intake resonance tuning at all.]

Once 480mm (nearly 19 inch!) long intake runners had been decided upon, the next question was how they'd be fitted under the bonnet. The previous model VG30DE had placed the plenum chamber centrally on top of the V6, with relatively short but direct runners connecting the plenum to the intake valves. The measured pressure drop with this arrangement was 85 units.

[The units used are not completely clear - they may be mm of water at 4.4 cubic metres/minute flow.]

The first prototype VG30DETT intake system design placed a plenum chamber above each bank of cylinders, with the intake runners for that head connected to the plenum above it. This required that each runner go through nearly a U-turn, and so was called the 'U-turnport' design. The pressure drop of this design was, however, very high - being measured at 105 units, or nearly 24 per cent higher than the original VG30DE design with the centrally-located plenum chamber.

A 'crossport' design was then built, where the plenum chamber feeds the opposite cylinder bank. This design allowed the retention of the long intake runners but gave a measured pressure drop of only 80 units - better than the VG30DE design, despite the use of intake runners nearly twice as long. The change from a U-turnport to a crossport design resulted in a 5 per cent increase in peak power.

The intake system ahead of the intake manifold was also extensively developed. The airfilter housing used two filtering elements to provide sufficient filtering area within the tight confines of the engine bay. Only a single airflow meter was used, but the junction where the duct splits to feed each turbo was extensively developed. The final design used a very long radius inner bend reducing measured pressure drop by 77 per cent over some of the designs trialled. Together with the use of a bellmouth at the entrance to the airflow meter, these flow improvements increased peak power by 2 per cent.

Since the VG30DETT was launched, we have become used to high performance engines being fitted with twin turbos. However, at that time, it was daring move. In terms of the cost penalty alone, doubling the number of turbos must have been prohibitive.

The engineers justified the use of twin turbos with some careful study. To avoid the response penalty of fitting a single large turbo with a commensurately large rotating inertia, the engineers used two hybrid turbos, each with a Garret T25 compressor and a Garret T2 turbine. Using these hybrids reduced rotating inertia by 20 per cent over conventional T2 turbos. And then of course there was the use of two smaller turbos, rather than a single large one. Compared with a single turbo of equivalent flow performance, the use of twin turbos reduced the rotational inertia by 30 per cent.

However, the Nissan engineers suggested that the use of twin turbos only became advantageous at peak power outputs of over 250hp.


The timing of the exhaust valves is fixed, with opening occurring at 59 degrees BBDC and closing at 9 degrees ATDC. 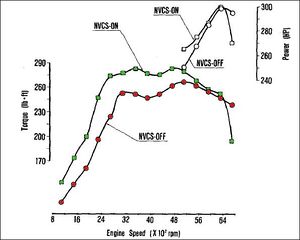 At idle and low loads the NVCS is off, while at medium to high level loads at less than 6100 rpm the NVCS is on. At all loads above 6100 rpm, NVCS is off. The action of NVCS makes a substantial difference at engine speeds below 6100 rpm, adding as much as 30ft-lbs to the torque output.

The 28 degrees of overlap when NVCS is on is high compared with what would be used without having variable valve timing. The similar era Nissan RB30ET SOHC turbo in-line six (as fitted to the Holden VL Turbo) can be compared - it has a cam overlap of only 18 degrees. Note that the graph shows that more torque is obtained everywhere under 6100 rpm with the NVCS 'on' valve timing; however the 8 degree overlap that occurs with the NVCS off helps give a very smooth idle.

Upgrades made to the VG30DETT over the VG30DE include the use of pistons with fully floating gudgeon pins, piston oil squirters and pistons equipped with cooling channels, "autothermatic" pistons with insert steel struts, and better conrod big-end bearing materials.

The exhaust manifold was cast from Ni-resist D5S material rather than conventional high silicon cast iron, giving an improvement in tensile strength from 3 kg/square mm to 9 kg/square mm at an expected maximum exhaust temperature of 900 degrees C.

The sump was also reconfigured, with an oil guiding plate designed to return oil scooped up by the crankshaft counterweights back to the deep section of the pan.

While the RB26DETT engine of the GT-R Skyline is usually awarded kudos when Nissan's turbo engine line-up over the years is considered, the VG30DETT - with its variable valve timing and carefully tuned intake manifold system - is the more sophisticated of the two engines. (But isn't it amazing to consider that the one company developed - at the same time - two such brilliant twin turbo six cylinder engines?)

At the end of the development the engineers said: "We are confident that this engine has achieved the utmost in power output together with high torque and high response worthy of a new generation sportscar."

And lots of modifiers over the years have agreed with them... 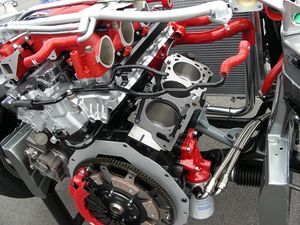 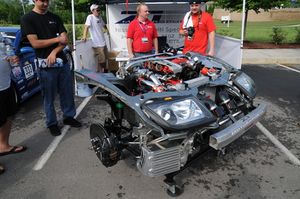